Symphony Performance in the Park 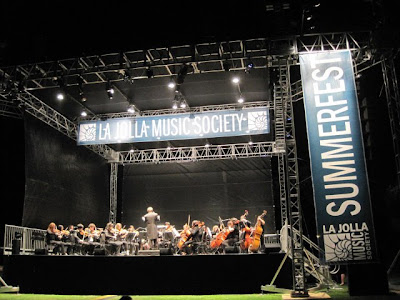 Last night La Jolla Music Society's SummerFest 2010 kicked off with a free concert in Ellen Browning Scripps Park. The show was spectacular and included selections from famed composers like Vivaldi, Schumann and Mendelssohn.
One of my favorite pieces was one in which a local 12-year-old virtuoso made her violin sing. In one short month she is bound for The Juilliard School in New York- and doubtlessly musical greatness.
I also really enjoyed a selection performed by a two-man group called "The Perfect Storm." The teenagers played traditional Chinese instruments that looked funny but sounded exquisite.
I love going to this every year with my friends - and this year with my new puppy in tow. The sound of the ocean's waves mingling with the classical music is a match made in heaven. If only they did free performances more often....

Posted by Meredith Wade at 7:30 PM